Facial Rejuvenation
BOTOX
Facial rejuvenation describes a wide variety of treatments and procedures seeking to maintain or restore the texture, appearance and/or position of the face. As time passes the skin and other soft tissues of the face are subject to potentially damaging forces such as ultraviolet light, repeated muscle contraction, and gravity. Altered pigmentation, rhytids (wrinkles), loss of skin elasticity, and drooping or sagging of the skin may result. Treatment options for facial rejuvenation are numerous and include such options as non invasive therapies (light emission treatments, microdermabrasion, chemical peels), injectible therapies (botulinum or BOTOX®, collagen or other filler agents) and surgical treatments (blepharoplasty or eyelid lift, brow lifts and midface lifts).

Non-invasive treatments are numerous and include such options as light emission treatments, dermabrasion and microdermabrasion, and chemical peels. Light emission treatments use a variety of wavelengths of light to reduce wrinkles and pigmentation while improving skin tone and texture. Chemical peels utilize various types and concentrations of chemical substances to improve skin texture, decrease pigmentation and decrease wrinkles. Trichloroacetic acid and glycolic acid are two commonly used chemical peel agents. Microdermabrasion mechanically removes the most superficial layer of the skin, while dermabrasion also affects a deeper portion of the skin.

Botulinum toxin, or BOTOX® as the most popular form of the protein is known, is an agent that inhibits muscle contraction, thereby preventing unwanted wrinkles from appearing. It is commonly used cosmetically to treat frown lines in between the eyebrows, smile lines at the edges of the eyelids, horizontal wrinkles across the base of the nose and wrinkles in the forehead. BOTOX® is also used for a wide variety of other purposes. The effects of BOTOX® are temporary as the nerves affected regenerate their ability to communicate after a period of approximately three months. BOTOX® treatments are done in the office without the need for any anesthesia. A treatment involves several injections into specific muscles using a very small needle. Most patients say the injection feels like a small pinch and any discomfort is minimal. Results are visible in as little as two to seven days. Periodic treatments with BOTOX® are needed to prevent reappearance of the unwanted wrinkles.

Treatment of wrinkles present without muscle movement is often carried out with dermal fillers. Collagen or hyaluronic acid based products are among the most commonly used. Collagen is a component of the skin involved in elasticity. Hyaluronic acid is a compound that draws water into an area, thereby softening or eliminating the wrinkle. Typical locations of use for dermal fillers include the brow (for harsh frown lines), lower cheek crease, and lips (both to fill out thinner lips and to treat lines around the lips). Dermal fillers are also administered in the office setting with cold compresses or local anesthetic given prior to the treatment. Oftentimes, the area injected will need to be massaged afterward to achieve the best cosmetic result. Depending on the agent used, the effects may last several months or longer.
Eyelid Surgery
Surgical treatments 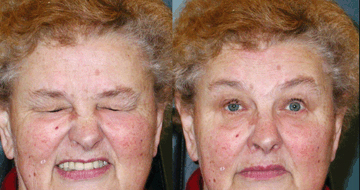 Blepharoplasty describes removing excess eyelid skin and/or muscle or repositioning eyelid soft tissues to restore a more refreshed, alert and rested appearance. Often upper eyelid skin drooping is at least partly accounted for by a drooping eyebrow. Lifting the eyebrows returns them to a more youthful position and decreases the appearance of tiredness or droopiness of the upper eyelid. An eyelid crease incision made during blepharoplasty or an endoscopic approach with small incisions hidden by the hairline may be used to elevate the eyebrows. Simply removing upper eyelid skin without repositioning the eyebrow may worsen the problem by pulling the brow further down.

The cheek area, often referred to as the midface, can also sag or droop as the attachments to the facial bones lengthen with time. Tightening these connections lifts the cheek and restores a more youthful contour.

Blepharoplasty can be performed using a skin incision or an incision through the mucous membrane of the eyelid (the conjunctiva). If a skin incision is planned, precise measurements and skin markings are made prior to beginning the procedure. No surgical markings are needed for an incision made through the conjunctiva. Local anesthetic is then injected and the surgical site is washed with a sterile cleanser. A plastic contact lens may be placed on the eye for protection during surgery. Once the surgical site is anesthetized, the initial incision is made.

Upper Eyelid Blepharoplasty
In upper eyelid blepharoplasty, soft tissue removal is performed using a heated cautery needle or scissors depending on the tissue type and the surgeon’s preference. Pinpoint bleeding is controlled using cautery or a chemical clotting agent. Most surgeons recommend sutures (stitches) to close the operative site. In many cases the sutures used will dissolve over time, though occasionally removal is needed.

Lower Eyelid Blepharoplasty
Lower eyelid blepharoplasty often uses an incision made through the conjunctiva. The protruding, fatty tissue of the lower lid is removed or sculpted. Once tissue is removed or repositioned, stitches may be placed to close the operative site. If redundant skin is present, a thin strip just below the eyelashes may be excised.

At the completion of surgery, antibiotic ointment is typically applied over any incisions. Ice pack compresses are recommended for the first two days to limit swelling. Warm compresses are used thereafter to aid in resolution of bruising. Discomfort is usually minimal and controlled by over the counter medicines such as acetaminophen. Brief follow up postoperative appointments are generally made a week and two months after surgery, though additional visits may be requested if needed

Thank you for subscribing. You will be getting up to date information on current news at the Chippewa Valley Clinic.

By submitting this form, you are granting: Chippewa Valley Eye Clinic , 2715 Damon Street , Eau Claire, WI, 54701, permission to email you. You may unsubscribe via the link found at the bottom of every email.

By submitting this form, you are granting: Chippewa Valley Eye Clinic , 1110 Oakridge , Eau Claire, WI, 54701, permission to email you. You may unsubscribe via the link found at the bottom of every email.